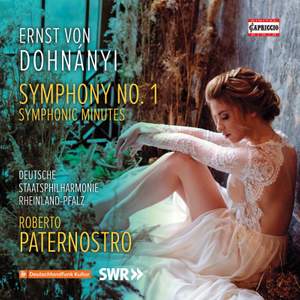 Talk about the “wow” factor. This symphony, and especially its finale, have it in spades...I can recommend Paternostro’s new recording enthusiastically and without reservation. — Fanfare, May/June 2020 More…

The Symphony No. 1 in D minor op. 9 belongs to Dohnányi’s early years of success. Among all the influences of the late Romantic tradition, that by Brahms’ music can be discerned here once more. From it, Dohnányi forms a kind of early Neo-Romanticism that can be viewed as a continuation of the 19th century while avoiding the Expressionist, sprawling violence of the beginnings of Modernism in the 20th century. Reminiscent of Mahler and Strauss is the sovereign treatment of the large orchestra, in which many details stand out, making a major contribution towards the quality of the work. The Symphonic Minutes op. 36 was written in 1933 in the context to compose a Hungarian dance game. With this release Capriccio starts a new Edition with recordings of these still less known but powerful Music from the hungarian Composer Ernst von Dohnanyi.

Talk about the “wow” factor. This symphony, and especially its finale, have it in spades...I can recommend Paternostro’s new recording enthusiastically and without reservation.

Paternostro the Deutsche Staatsphilharmonie Rheinland-Pfalz play it with exuberant panache, and why wouldn’t they? Like so many of Dohnányi’s smallerscale works, this is music that takes the sound of an orchestra, bursts it between tongue and palate, and savours the taste. All five movements in this performance are buoyant and zesty.

This is a worthwhile CD, enjoyable and a useful introduction to, or reminder of, the talents of Ernst von Dohnányi.