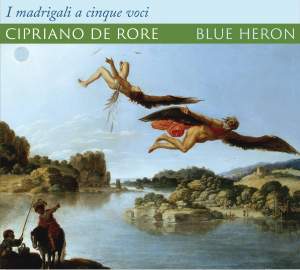 The enunciation is excellent, and the engineering, reasonably close with sufficient “room” to support a range of color. The liner notes are frankly the best I’ve yet encountered in English in... — Fanfare, January/February 2020 More…

The first release of new material from Blue Heron since winning the 2018 Gramophone Classical Music Award for Early Music, this two-album set is the world-premiere recording of Cipriano de Rore’s landmark first book of madrigals for five voices. The set includes all twenty madrigals in De Rore’s 1542 print, as well as readings of the Italian poems (many of which are by Petrarch) by Alessandro Quarta. De Rore is celebrated as an innovator who helped create the madrigal as it is known today, putting the music at the service of the text and inventing a new, dramatic, and expressive harmonic language. In this music, listeners will perceive a deep engagement with the text, an engagement matched by the singers of Blue Heron, who were led by both Scott Metcalfe and Alessandro Quarta in developing an appropriately rhetorical style of performance. Musicologist Jessie Ann Owens has shown that the book is a poetic and musical cycle that likely resulted from a collaboration between De Rore and the Venetian poet Giovanni Brevio, who wrote the opening and closing poems of the set. The narrative structure is illustrated with “the colors of the modal system,” the madrigals being sequenced in modal order. Professor Owens’ research and conclusions are presented in extensive notes in the booklet. Prof. Owens and Blue Heron won the 2015 Noah Greenberg Award from the American Musicological Society, which provided stimulus funding for the project.

The enunciation is excellent, and the engineering, reasonably close with sufficient “room” to support a range of color. The liner notes are frankly the best I’ve yet encountered in English in any CD set...this is an entirely successful collection of Rore’s first book of madrigals by Metcalfe’s Blue Heron. Recommended? Do you actually need to ask?

Rore is worlds away from Blue Heron’s Peterhouse project but the same technical standards, seriousness of purpose and communicative musicality are very much in evidence. They tackle Rore’s lofty idealism head-on...This is (seriously) impressive.