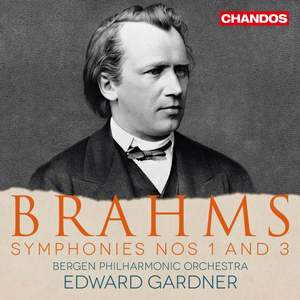 Brahms’s marking for the main portion of the opening movement of his First Symphony is a plain Allegro, but Edward Gardner takes it at an unusually swift tempo, keeping the drama buoyant and... — BBC Music Magazine, December 2019, More…

This first installment in a new Brahms series from Edward Gardner demonstrates the strength and suppleness of the Bergen String section, and outstanding ensemble playing across the orchestra. Chief Conductor of the Bergen Philharmonic since October 2015, Edward Gardner has led the orchestra on multiple international tours, including performances in Berlin, Munich and Amsterdam and at the BBC Proms and Edinburgh International Festival. Edward was recently appointed Principal Conductor Designate of the London Philharmonic Orchestra, with his tenure commencing in September 2021. In demand as a guest conductor, the previous two seasons saw Edward debut with the New York Philharmonic, Chicago Symphony Orchestra, Rundfunk-Sinfonieorchester Berlin, Wiener Symphoniker and the Royal Opera House in a new production of Káta Kabanová (praised as a ‘magnificent interpretation’ by The Guardian); while returns included engagements with the Gewandhausorchester Leipzig, Philharmonia Orchestra and Orchestra del Teatro alla Scala di Milano. In April 2019, he conducted the London Philharmonic Orchestra at the Lincoln Center in New York.

Brahms’s marking for the main portion of the opening movement of his First Symphony is a plain Allegro, but Edward Gardner takes it at an unusually swift tempo, keeping the drama buoyant and avoiding any undue ponderousness…The feeling of transparency is helped, too, by having the first and second violins divided left and right.

Gardner has something rather original to say about these works, for what he does here, I think, is to make plain the tension between the composer’s Classical sensibility and Romantic impulses…In some respects, his highly concentrated interpretation of the Third Symphony is the more impressive of the two…The Bergen Philharmonic’s strings handle the swift tempos with aplomb.

This is Brahms interpretation in excelsis. Gardner seems to me to have judged every tempo right, and to combine the powerful momentum and flexibility that Brahms demands with passionate attention to detail.