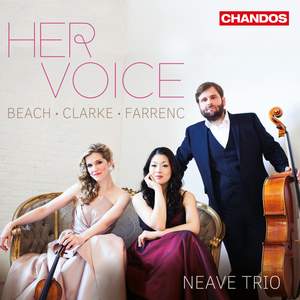 The first female Professor at the Paris Conservatoire, the first female player in the Queen’s Hall Orchestra and the first female American Symphonist to be published. The Neave Trio celebrate these three outstanding pioneers on this captivating album. Since forming in 2010, Neave Trio – violinist Anna Williams, cellist Mikhail Veselov, and pianist Eri Nakamura – has earned enormous praise for its engaging, cutting-­edge performances. WQXR explains, "'Neave' is actually a Gaelic name meaning 'bright' and 'radiant', both of which certainly apply to this trio's music making." The Boston Musical Intelligencer included Neave in its “Best of 2014” and “Best of 2016” roundups, writing, “it is inconceivable that they will not soon be among the busiest chamber ensembles going,” and “their unanimity, communication, variety of touch, and expressive sensibility rate first tier.”

Collectors may prefer all-Beach or all-Farrenc couplings but the Neave’s programme makes a splendid introduction to these three pioneering female composers.

Instrumental finesse and a fine sense of colour.

What excellent performances this trio gives here of works that deserve them: by Louise Farrenc, Amy Beach and, most revealing, Rebecca Clarke, whose quicksilver, folk-inspired piece from 1921 can be combative, but has moments of haunting respite.