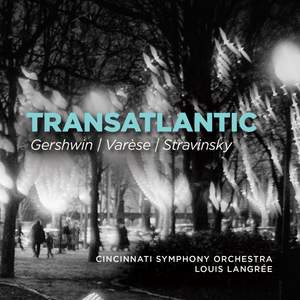 His interpretation [of the Gershwin] is exceptionally clear (the crystalline recorded sound helps a great deal), and dances and shimmies without getting carried away. Some may find it a tad cool,... — Gramophone Magazine, November 2019 More…

The newest release from the Cincinnati Symphony Orchestra and Music Director Louis Langrée illustrates music transcending borders and composers drawing inspiration from the world around. The third CSO album with Langrée features the iconic American composer George Gershwin’s take on bustling Paris, the French composer Edgard Varèse’s take on New York’s soundscape, and Igor Stravinsky composing the same work across two continents. Recorded at Cincinnati Music Hall, the release marks the highly anticipated world premiere recording of the new critical edition of Gershwin’s An American in Paris, and also showcases the virtuosity and sound of the CSO through the original and rarely performed version of Edgard Varèse’s epic Amériques with 146 musicians, as well as Stravinsky’s Symphony in C.

His interpretation [of the Gershwin] is exceptionally clear (the crystalline recorded sound helps a great deal), and dances and shimmies without getting carried away. Some may find it a tad cool, but I rather like its air of Parisian elegance reading of the original 1922 version of Varèse’s Amériques may not be as joyously wild as Ludovic Morlot’s from Seattle (on that orchestra’s in-house label), but it still has gobs of character.