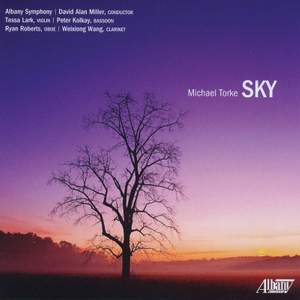 Acclaimed composer Michael Torke has brought fresh life to an old, but popular form, as these four concertos demonstrate. For Sky, a concerto for violin, Torke imposed classical forms on Bluegrass, evoking the music of the people who settled Kentucky. The other three concertos (for bassoon, oboe, and clarinet) test the limits of the instruments with unstale musical expression. Torke's music has been commissioned and performed by organizations such as the New York Philharmonic, the English National Opera, the London Sinfonietta, and the New York City Ballet, among many others. He has created a substantial body of works in virtually every genre. Award winning violinist Tessa Lark is a budding superstar in the classical realm and a highly acclaimed fiddler in the tradition of her native Kentucky. Bassoonist Peter Kolkay is on the faculty at the Blair School of Music at Vanderbilt. The recipient of an Avery Fisher Career Grant, he is an active soloist and chamber musician. Oboist Ryan Roberts is a member of the New York Philharmonic and has performed as guest principal oboe with the Chicago Symphony Orchestra and the San Francisco Symphony. Weixiong Wang is principal clarinetist of the Albany Symphony and the winner of several international competitions.