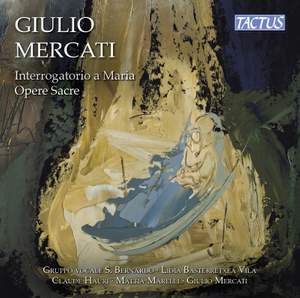 The organist Giulio Mercati, already protagonist of the Tactus’ album dedicated to the rediscovery of Giovanni Tebaldini, on this new release covers the role of the author with the scene music of the “Interrogazione a Maria” by Giovanni Testori, and some of his own vocal, choral and organ sacred compositions. After attending the Bruno Bettinelli compositional school, Mercati here demonstrates technical and expressive awareness of great aesthetic depth which relates in a convincing and creative way to the traditional musical heritage. In the performance, where we also see him as organist in the solo pieces, we have to note: the San Bernardo Vocal ensemble (accompanied by Mattia Marelli at the organ), the soprano Lidia Basterretxea Vila, and the cellist Claude Hauri. The organ used is the 1965 Mascioni of the Church of S. Maria degli Angioli in Lugano.