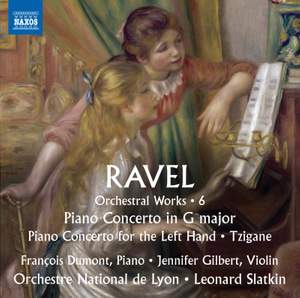 Composed between 1929 and 1931, Ravel’s two piano concertos reflect his enthusiasm for jazz, though one that was thoroughly absorbed into his own idiom. The Concerto in G major, originally conceived as a Basque rhapsody, is lightly scored but sports a vivacious percussion section, galvanizing motor rhythms and a slow movement of astonishing beauty. The Concerto for the Left Hand, commissioned by Paul Wittgenstein who had lost his right arm in the First World War, is a single movement tour de force, as is Tzigane, a gypsy violin showpiece of dazzling virtuosity.

All three works are given very convincing performances.