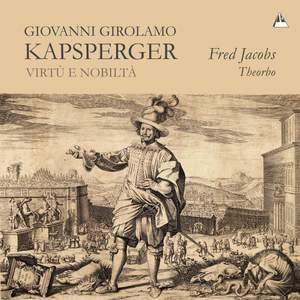 Fred Jacobs, Dutch advocate of the theorbo, that outlandish scale lute that became the rage at court and also in the opera in 17th century Europe continues his solo recital series of theorbo music for Metronome with an album devoted to the music of Kapsperger. The theorbo’s most notable exponent in Italy in the early 17th century was the remarkable gentleman composer-performer Giovanni Girolamo Kapsperger who though known as Il Tedesco della Tiorba- “The German Theorbo-player” was born in Venice of German noble family and spent his life composing and performing in Italy and serving the papal court in Rome. His extra-ordinary music, notable for its somewhat sometimes wayward and experimental tonality, has been influenced by that other noble Italian experimentalist- Gesualdo and even compared to Monteverdi. This recording concentrates on his Roman works, written for a noble audience and for the private entertainment of the court of pope Urban VIII Barberini. It demonstrates that behind the novelty of style of Kapsperger’s music there lies a great and serious composer who knew the rules but particularly how to bend them.