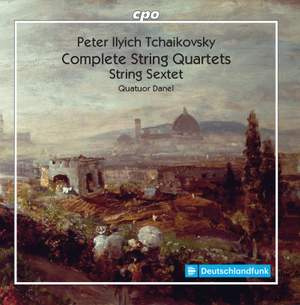 this new set can be recommended unhesitatingly as a modern complete recording of the quartets and the Sextet. — Fanfare, March/April 2020 More…

Between the operas and ballets, the symphonies, tone poems, and concertos, and the songs and piano miniatures representing most of the significant entries in Peter Ilyich Tchaikovsky’s work catalogue, the major genres of string chamber music register their presence as a salient minority. However, these works merit our full attention because they range over practically the whole of Tchaikovsky’s compositional horizon – from the rising of his creative sun to its premature setting. The Quartet Movement in B flat major from his final years as a student already attests to his narrative ambitions as a composer. Between 1871 and 1876, in his three full-size quartets, he then succeeded in producing a compelling synthesis consisting of discipline and boundless imagination, folkloristic nuances and individual expressivity, and transparency of compositional technique and impassioned communicativeness. In 1890, riding on the wave of his last worldwide opera success (The Queen of Spades), Tchaikovsky drew on his memories of Florence for his String Sextet, in order to cross over the border separating chamber music from symphonic music. The dreams and passions captured in this powerful work, its wealth of ideas, and its pure joie de vivre end up calling into question all the speculations concerning the circumstances surrounding his unfortunate death.

this new set can be recommended unhesitatingly as a modern complete recording of the quartets and the Sextet.

Though this is very much a 21st-century approach to Tchaikovsky, the Danels don’t hesitate to wear their hearts on their sleeves – just not always, perhaps, in the exact places where convention might lead you to expect it. A fascinating set, then, coupled to a Souvenir de Florence of supercharged verve and almost orchestral lushness.