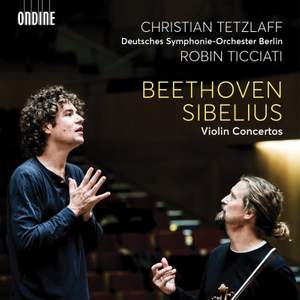 Such glorious playing cannot be recommended too strongly, but for me the Beethoven performance makes a greater contribution to the work’s discography. I won’t soon forget how deeply Tetzlaff... — Fanfare, January/February 2020 More…

In this new concerto album one of the greatest violinists of our time, Christian Tetzlaff, performs two standard violin concertos in fresh new interpretations together with the Deutsches Symphonie-Orchester Berlin directed by the orchestra’s exciting new music director, Robin Ticciati. Both Ludwig van Beethoven and Jean Sibelius made outstanding contributions to the history of music as great symphonists. Both composers also wrote a violin concerto – Beethoven wrote his D major concerto in 1806, Sibelius his D minor concerto a century later. Although these works do not share much in common in style, both concertos are much more than virtuosic showpieces – it is music with great depth and feeling which has immortalized both composers. Today, these monumental masterpieces by Beethoven and Sibelius are among the most performed concertos by violinists throughout the world. Christian Tetzlaff is considered one of the world’s leading international violinists and maintains a most extensive performing schedule. Musical America named him ‘Instrumentalist of the Year’ in 2005. His recording of the Bartók Violin Concertos (ODE 1317-2) received both Gramophone and ICMA Awards, and the recording was also a finalist for the BBC Music Award in 2019. His recording of the Violin Concertos by Mendelssohn and Schumann, released on Ondine in 2011 (ODE 1195-2), and Bach Sonatas and Partitas released in 2017 (ODE 1299-2D) received the ‘Preis der deutschen Schallplattenkritik’. In addition, in 2015 ICMA awarded Christian Tetzlaff as the ‘Artist of the Year’, and he also received ECHO ‘Instrumentalist of the Year’ award in 2017.

Such glorious playing cannot be recommended too strongly, but for me the Beethoven performance makes a greater contribution to the work’s discography. I won’t soon forget how deeply Tetzlaff moved me.

Tetzlaff may at times excitedly rush his fences, but in collaboration with Robin Ticciati and his alert Deutsches Symphonie-Orchester Berlin, he transforms aspects of what so many have treated as a sort of Holy Grail into a beer tankard…If Beethoven’s Concerto emerges as uncompromisingly provocative, Tetzlaff’s Sibelius also errs on the side of danger…In many respects, a real knock-out.

little lightning bolts of superlative playing will strike you. The way Tetzlaff creates casual sparks in the Sibelius finale will put a bright smile on your face. And in Beethoven, too, there is an admirable mix of the willfully rugged and smooth, somnambulistic assuredness.

The hell-for-leather finale of the Sibelius makes for an exhilarating white-knuckle ride, but buy this for the beautifully-paced, luminous Beethoven – I mean no disrespect to Christian Tetzlaff when I say that I was absolutely captivated even before he arrives on the scene, thanks to Ticciati’s knack for balancing light and shade in the long introduction. This is the violinist’s third recording of the work, and it shows in an interpretation that has all the irreverent good humour of a witty sparring-match with an old friend.

Who needs another recording of the Beethoven and Sibelius violin concertos? It turns out we all do, and this is it...these performances have the lightness and rightness of touch born of long experience. That levity finds an ideal grounding in the unapologetically modern-instrument sound Robin Ticciati draws from the Deutsches Symphonie-Orchester Berlin, weighty yet supple.