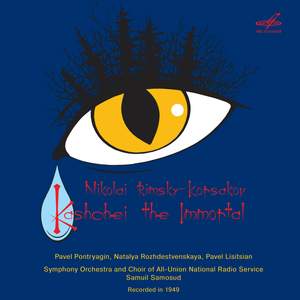 To commemorate the 175th anniversary of Nikolai Rimsky-Korsakov, Melodiya presents for the first time on CD the archival recording of the opera Kashchey the Immortal. This first studio recording of the opera Kashchey the Immortal was made 70 years ago, in 1949. The leading parts were performed by truly outstanding musicians – Natalia Rozhdestvenskaya, a legendary soloist of the All-Union Radio, concert singer, and the mother of conductor Gennady Rozhdestvensky, Pavel Lisitsian, one of the leading soloists of the “golden era” of the Bolshoi Theatre, and Pavel Pontryagin, an owner of a unique tenor timbre. The recording features the symphony orchestra and the choir of the All-Union Radio. In the 1940s and 1950s, the orchestra put in a lot of effort to perform and record rare opera masterpieces of the Russian and foreign repertoire. The performance was conducted by Samuel Samosud, who had been chief conductor of the USSR Bolshoi Theatre and stood at the conductor’s desks of the largest opera houses in Moscow and Leningrad.