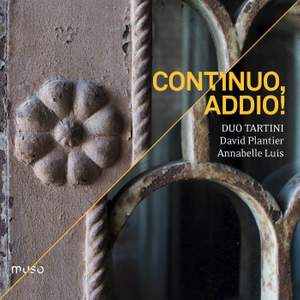 Tartini: Sonata for violin and cello in G Major, B. G7

Abaco, J: Capricio for cello solo in E Minor, No. 6

Nardini: Sonata for violin and cello in C minor, Op. 5 No. 6

Lahoussaye: Sonata for violin and cello in G minor, Op. 1 No. 4

The instrumentation indications printed on the frontispieces of the albums of eighteenth century violin sonatas were numerous and varied. However, the renewal of baroque performance over recent decades has imposed the uniformity of a continuo bass played on harpsichord and cello, despite the celebrated ‘o’ of Corelli and many of his pupils (violoncello o cembalo). In fact, the musical art of the time knew no standard, in particular in connection with violinists. Every violinist-composer left his imprint on the repertory, through his music, his performing style, his technique, his bowing; nothing was similar from one city to another, from one country to another. Though the use of the harpsichord is not to be called into question, other practices are common, particularly in the case of the violin sonatas. This is true even more specifically from the 1740s onwards, the start of the ‘period of transition’ to the classical style and of the development of violin technique. It was unquestionably Tartini and his disciples who pushed this new practice to the forefront. It is one of the features of the current programme to perform the music of these great violinists of the eighteenth century with an accompaniment of solo cello, which, far from being incidental, has a major role in the score; it interacts with the violin’s virtuoso discourse with little imitations, diminutions, pizzicati, chords and double-stops. Other works render justice to the cello as a solo instrument, fully equal to the violin, with the first veritable duets for both instruments, something very much in vogue in the classical period. This musical itinerary of duets and sonatas for violin and cello offers a new experience, one that is varied and fascinating, with works of great beauty. Yet David Plantier and Annabelle Luis also show us a new sound image: the fullness of only two instruments of the same family is surprising, whilst the infinite