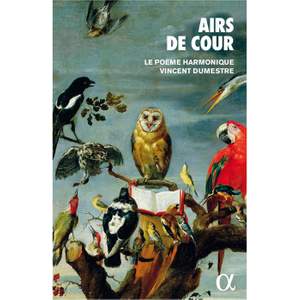 For more than a century, from the last Valois kings to the early years of the reign of Louis XIV, the air de cour was truly the emblematic genre of French secular music. The term bears witness to the influence on and transformation by worldly and literate circles of vocal genres of popular origin such as the vaudeville, combined with Italian influences (the villanella), based on the principles of a simple strophic musical setting that facilitated understanding of the poetic text. Three composers dominated the production of airs de cour in the reigns of Henry IV and Louis XIII, bringing the genre to its peak: Pierre Guédron (1565-1620), Antoine Boesset (1587-1643) and Étienne Moulinié (1599 -1676). To mark the twentieth anniversary of his ensemble, Vincent Dumestre has chosen to celebrate the air de cour by bringing together excerpts from his five recordings devoted to the genre. A book accompanies this double album, including an article written by Thomas Leconte of the Centre de Musique Baroque de Versailles, a rich array of illustrations and an article on the historical context by Alexandre Maral, Curator General at the Musée National du Château de Versailles.