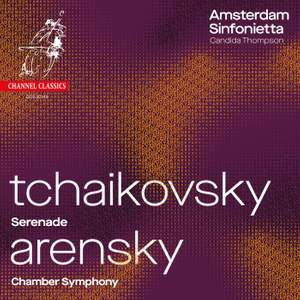 The recorded sound has a wonderful bloom which matches that of these exceptional performances. — Fanfare, March/April 2020 More…

Arensky: Chamber Symphony Op. 35 in A minor in Memory of P. I. Tchaikovsky

Tchaikovsky's Serenade is one of the most beautiful of all works for string ensemble, and it has been frequently performed by Amsterdam Sinfonietta since its establishment in 1988. Arensky wrote his Second String Quartet in memory of the composer, with whom he was befriended. His homage overflows with melancholy and dark tone colours. The middle movement, based on a song by Tchaikovsky, was later arranged by Arensky for string orchestra.

Amsterdam Sinfonietta took upon itself to arrange and perform the entire Second Quartet. In Tchaikovsky's footsteps, Arensky made use here of religious chant and motifs from Russian folk music.

The recorded sound has a wonderful bloom which matches that of these exceptional performances.

The Serenade [is] full of quick and graceful movement, most of all in the heightened tension and suppressed drama of the Andante...The Sinfonietta violins are as sweet and silky as one could wish for in the high-lying stretches of the first movement of the Second Quartet by Arensky, without entirely banishing misgivings over the part’s suitability for transcription.