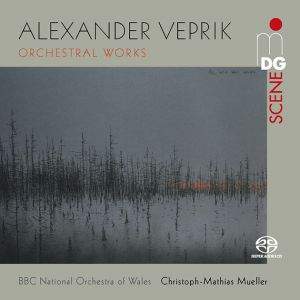 Weprik: Dances And Songs Of The Ghetto, Op. 12

Alexander Veprik was regarded as a star in the young Soviet generation of composers of which Dmitri Shostakovich was a member, and his music was enthusiastically performed even in the distant West. But then he fell out of favour as a victim of

Stalin's anti-Semitic policies and was banned to the Gulag. His name disappeared from program pages - and has yet to reappear.

Mueller?s selection consists of works from very different phases in the composer's life. The 'Five Little Pieces' as well as the 'Dances and Songs of the Ghetto' play with the transmitted Eastern Jewish melodies that accompanied Veprik, who was born near Odessa, throughout his life.

At the time Veprik, a professor in Moscow, was at the height of his popularity, and his pieces were even presented on one of the first music broadcasts on Radio Berlin..

After Stalin's death, Veprik, who bore the scars of his many years of imprisonment in a labour camp, was released from the Gulag. The 'Pastorale' lends expression to the pain that he had suffered and continued to feel and is marked by anguish.

Veprik?s last large-format orchestral work is entitled ?Two Poems.? The BBCNOW enters into the spirit of this music and has provided a marvellous recording of exceptional music and recording standards. Recorded in MDG's trademark 2+2+2 surround sound on SACD, this is a fascinating introduction to Veprick's music.