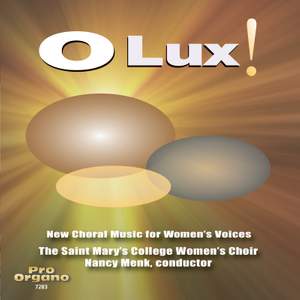 Kathleen Allan: At the heart of our stillness

Busto: The Lord is my Shepherd

A. Emmett Adam: The Bells of Saint Mary's

The Saint Mary's College Women's Choir, under direction of Nancy Menk, present a program of new choral music for women's voices, as recorded in the Church of Loretto on the campus of Saint Mary's College, Notre Dame, Indiana. The Saint Mary’s College Women’s Choir regularly commissions and performs new works for women’s voices. An outgrowth of this emphasis is the publication of the Saint Mary’s College Choral Series, a collection of new works for women’s voices, published by earthsongs of Corvallis, Oregon. The Choir has performed throughout the United States and has appeared before state, division, and national conferences of the American Choral Directors Association. Each November the Choir hosts the annual Saint Mary’s College High School Women’s Choir Festival in which 20 choirs from neighboring states perform for each other and a panel of commentators. The Choir tours nationally every other year, and regularly performs with the University of Notre Dame Glee Club in joint performances of major works with the South Bend Symphony Orchestra.