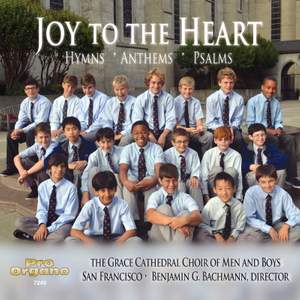 Joy to the Heart

Hurd, D: Ye who claim the faith of Jesus

Bairstow: I sat down under his shadow

Neswick: In the Cross of Christ I Glory

C. W. Douglas: Were you there?

Pinkham: Canticle 8: The Song of Moses

Albright: Look there! The Christ, Our Brother comes

The Grace Cathedral Choir of Men and Boys, San Francisco, under the direction of conductor Benjamin Bachmann, present a program spotlighting 20th century composers and choral arrangers in the Anglican choral tradition. The voice of a cathedral choir soaring upward like the great building it fills is a thrill and an inspiration to even the most unmusical listener. Grace Cathedral has had a men’s choir since its founding in 1906, but it was not until 1913 that boy’s voices were added. The centuries-old Anglican tradition of a men and boys choir has since blossomed here, as one of a handful of such choirs in the US. The Cathedral music staff oversees an extensive program of choir rehearsals (including mixed-voice volunteer choirs), music classroom work with the choristers, education for the cathedral congregation, concerts, choir tours, and a wide variety of other musical activities in the life of this cathedral and beyond. The choir tradition continues to flourish into Grace Cathedral’s second hundred years, inspiring those who are privileged to hear it, and bringing back fond memories to old choristers.