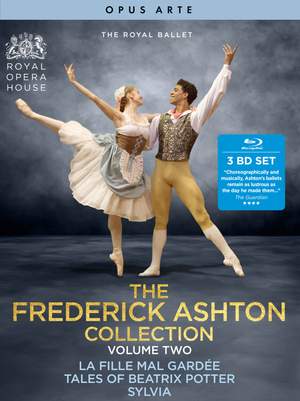 A happy collection of three noteworthy ballets presented in splendid style by a dance company at the top of its game — MusicWeb International, February 2020 More…

By contrast La fille mal gardée, starring Marianela Nuñez and Carlos Acosta, has been treasured as one of Ashton’s happiest creations – his artistic tribute to nature and his beloved Suffolk countryside.

The Tales of Beatrix Potter bring the famous stories of the English writer and illustrator to life in a warm and witty work for all ages. Swept up in the ballet’s childlike exuberance, the entire cast delivers outstanding portrayals of such colourful figures as Jemima Puddle-Duck, Mr Jeremy Fisher, Mrs Tiggy-Winkle and the irrepressible Peter Rabbit. Recorded in true Surround Sound.

In Ashton you get an incisive choreographer so in tune with the music’s rhythms that sound and image appear indivisible. I’m especially in awe of the abstract moves in the two Monotone ballets, so perfect for the enigmas of Satie. As for character dancing in sync to charming music, what could be better than Tales of Beatrix Potter?