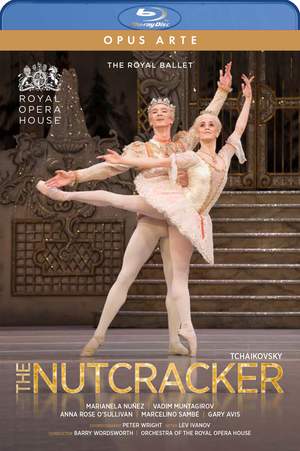 Peter Wright’s timeless and enchanting interpretation of The Nutcracker has been in The Royal Ballet’s repertory for over thirty years. Presented in a festive period setting, this charming and magical production features Marianela Nuñez as the exquisite Sugar Plum Fairy and Vadim Muntagirov as her charming Prince.

Vivid designs and spellbinding stage effects which include authentic Christmas tree decorations that magically come to life, and Tchaikovsky’s sumptuous, iconic score combine to create the quintessential Christmas ballet – an opulent treat for the senses for audiences of all ages.

Filmed in High Definition and recorded in true surround sound.

“When it comes to Nutcrackers, there is simply nothing to beat it.” (The Times ★★★★★)

“There was gorgeous dancing from Nuñez’s Sugar Plum, partnered by Vadim Muntagirov. With burnished technique and elegant line, they also make the grand pas de deux a conversation: those formal gestures are full of give and take, connection and response. As the magician Drosselmeyer, Gary Avis directed the action with heart as well as swagger, while the company dancing was bright and confident.” (The Independent ★★★★)

“The Royal Ballet’s Nutcracker returns as magical as ever to cast its spell... Barry Wordsworth, former Music Director of the Royal Ballet, knows Tchaikovsky’s score like the back of his hand and led an assured account, sensibly paced, with teasing rubatos in the Mirlitons deliciously held.” (Bachtrack ★★★★)