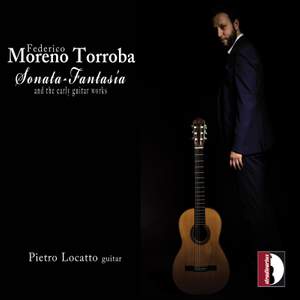 Pietro Locatto writes of his new release: “This recording was not primarily created for the purpose of creating a monographic work based on part of Federico Moreno Torroba’s repertoire for guitar, but originates from a personal and deeper need to recognize the relationship with my instrument in an expressive world. A world that can encompass within itself the aspects of my own way of playing, which is closer to how I personally “feel the guitar”, thus fixing an image, as true as possible, of this first step of my life and my artistic research. I have always been strongly fascinated by the Impressionist pictorial world, or more generally speaking of what actually comprises Art, by virtue of the fact it is able to synthesize a broader picture through micro images. Impressionism is a current which does not claim to elevate itself as an ambassador of “high ideals”, it is more hedonistic. It finds its strength in grasping that disenchanted beauty which originates from the joy itself of enjoying the smaller things of everyday life, that become the celebrated main actor in all its nuances. This kind of art is born within a context where the rhythms of Man are still marked by its relationship with the earth. Throughout Spain at the time, even more so than elsewhere, this expressive universe had as its leading actors landscapes, nature en plein air, popular songs, village dances, changing colours, light, sounds (the Piezas caracteristicas of this record are an emblematic example in this sense). Federico Moreno Torroba’s guitar music is heir to this expression. Not only. This is also one of the deepest “souls” of the guitar, which reveals itself in a completely unique way, both narrator and main integral participant of this reality, of which it is an eloquent spokesman.”