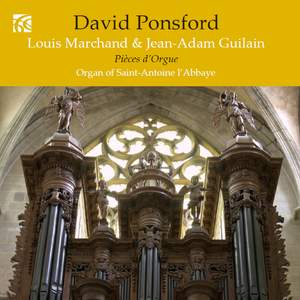 Highlights are multitudinous, but must include Marchand’s sensational Grand Dialogue, which concludes the disc: eight minutes of classical organ work-out, with all four manuals in use in the... — Choir & Organ, October 2019, More…

During the 18th century, Louis Marchand was the most famous French organist, and renowned throughout Europe. Therefore, in the year of the 350th anniversary of his birth, it is appropriate to record his best organ music on a historic instrument that has been sympathetically reconstructed in modern times. French organ music from the period of Louis XIV to the Revolution has always held fascination for performers and listeners alike. The kaleidoscope of colours, the rich and varied styles, and the sheer exuberance of the music never fail to captivate. Yet, performance practice of this music has never been fully understood. David Ponsford has spent much of his career studying this repertoire, resulting in his book French Organ Music in the Reign of Louis XIV (Cambridge University Press, 2011). The present series of recordings on the most important historical organs in France, including the music of Guillaume-Gabriel Nivers, Louis Couperin, Nicolas-Antoine Lebègue, André Raison, Jacques Boyvin, François Couperin, Nicolas de Grigny, Louis Marchand, Louis-Nicolas Clérambault, up to composers of the Revolution such as Balbastre, Beauvarlet Charpentier and Lasceux, is therefore the fruit of many years of research by a seasoned performer whose aim is to combine technical brilliance with intellectual understanding, to bring the music alive with authority and meaning.

Highlights are multitudinous, but must include Marchand’s sensational Grand Dialogue, which concludes the disc: eight minutes of classical organ work-out, with all four manuals in use in the composer’s commanding, multi- section style.