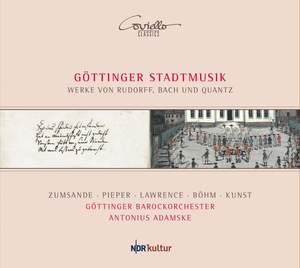 Carl Friedrich Rudorff shares with many other musical masters of his time the fate of being known today only to a small audience of experts - although this looked quite different during his lifetime. In 1796 he was awarded a burial of the second-highest category, which only belonged to high dignitaries and publicly recognised personalities. Rudorff was a sought-after teacher, choirmaster and composer who held an important public office as cantor figuralis. His works are only partially preserved and represent the early classical, sensitive style. The comparison with the older and better known colleagues, the Bach sons Carl Philipp Emanuel and Wilhelm Friedemann as well as the royal Prussian court composer Johann Joachim Quantz - all three also closely related to Gttingen - proves the vitality of the music scene in the then Central German province. Performed skilfully by the Gttinger Barockorchester under the direction of Antonius Adamske, these are authentic performances to introduce us to the music from this area.