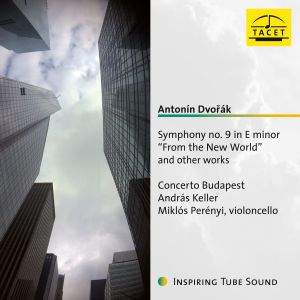 <p>Concerto Budapest with conductor Andras Keller perform Dvorak's Symphony No.9 in E minor "From the New World" and are joined by cellist Miklos Perenyi for Silent Wood, Op.68, no.5 and the Rondo Op.94. The Slavonic Dances Op.46 Nos. 5, 6 and 8 complete the programme. <p>Concerto Budapest Symphonic Orchestra is one of Hungary's leading orchestras, with its rich history and dynamism of its young musicians. It is one of the most progressive and versatile symphonic orchestras, whose playing is characterized by the passion, energy, and commitment that its musicians give to their performances of repertoire ranging from well-loved masterpieces to newly composed works of the twenty-first century. Through its ambitious and innovative programs and special sound, it has brought a new colour to Hungary's musical palette. <p>Concerto Budapest is one of Hungary's oldest ensembles with more than 100 years of history, its predecessor was founded in 1907. In 2007, on its 100th anniversary, Andrs Keller, world-renowned Hungarian violinist, pedagogue, and the founder of the Keller Quartet, was appointed as Artistic Director and Chief Conductor of the orchestra. Under his leadership, the orchestra underwent a major period of artistic growth and development, as the foremost young chamber musicians have joined him. <p>Andrs Keller's innovative concert programs are designed to engage both musicians and audience members alike in a dialogue with the music. To heighten this tension, old masterpieces are often heard alongside contemporary pieces, often illuminating new aspects of both works that are a result of that particular pairing.