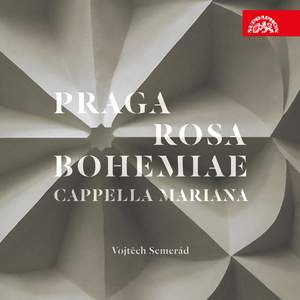 Works by Josquin and Obrecht are among the gems in this excellent collection. Crisp, one-to-a-part performances benefit from majestic recorded sound. — BBC Music Magazine, December 2019, 5 out of 5 stars More…

The focal point of the album is the recently rediscovered Prague manuscript of polyphonic masses, with the fabulously survived Missa Presulem ephebeatum by Heinrich Isaac, one of the most significant masters of the Franco-Flemish polyphonic style. Petrus Wilhelmi de Grudencz’s Presulem ephebeatum, whose thematic material inspired Isaac, attests to his mass being connected with Bohemia and Prague.

• The album contains a number of other extraordinary pieces - Josquin Des Prez’s celebrated Stabat Mater, with the added sixth voice, which has been uniquely preserved in this form in Bohemia.

Works by Josquin and Obrecht are among the gems in this excellent collection. Crisp, one-to-a-part performances benefit from majestic recorded sound.

Cappella Mariana boasts nine superb singers, including the outstanding soprano Hana Blažíková, heard in various combinations and directed from within by tenor Vojt Semerád. The ideal if indulgent acoustics of the refectory of Osek Monastery cast a glowing halo around so much vocal beauty.