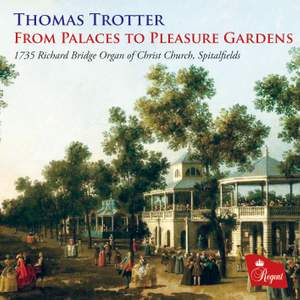 From Palaces to Pleasure Gardens

Trotter’s peerless playing has a propulsive energy, which, in the music’s grand fanfares, reed solos, echo passages and virtuoso passage-work, reveals why the Georgian organ and its players wowed... — Choir & Organ, September 2019, 5 out of 5 stars More…

Hook: Voluntary No. 2 in D major

Hook: Voluntary No. 5 in D minor

Pepusch: Voluntary No. 2 in C major

Thomas Trotter is one of Britain’s most widely admired musicians and one of the world’s most respected organists. The excellence of his musicianship isreflected internationally in his musical partnerships. He performs as soloist with, amongst many others, the conductors Sir Simon Rattle, Bernard Haitink, Riccardo Chailly, and Sir Charles Mackerras. He has performed in Berlin’s Philharmonie, the Gewandhaus in Leipzig, the Concertgebouw in Amsterdam, the Musikverein and the Konzerthaus in Vienna, and London’s Royal Festival Hall.

Georgian London was one of the wealthiest citiesin the world and there was a significant appetite for concerts which attracted composers from all over Europe and beyond. Much of the musical patronage had royal connections and another significant centre of London concert life were the Pleasure Gardens where organ concertos were invariably a part of the concerts.

This programme contains a kaleidoscopic mix of the secular (concertos) and the sacred (organ voluntaries) from that period, including works by Handel, Corelli, JC Bach, and John Stanley.

Christ Church Spitalfields is an Anglican church built between 1714 and 1729 to a design by Nicholas Hawksmoor. It was one of the first churches built for the Commission for Building Fifty New Churches, to serve London’s new settlements.

The organ installed in the new church in 1735 is the masterpiece of one of Georgian London’s leading organ-makers, Richard Bridge (c1688–1758). It could claim to be the largest organ in England at the time of its construction, and retained that distinction until the nineteenth century.

Both the building and the organ underwent major changes over the years but a major restoration project restored the organ to the 1735 specification and it is regarded as an instrument of great historic significance.

Trotter’s peerless playing has a propulsive energy, which, in the music’s grand fanfares, reed solos, echo passages and virtuoso passage-work, reveals why the Georgian organ and its players wowed popular audiences in ways that the genre has struggled to recapture in the last 300 years. In short: the player, the organ, the music and the recording are all… magnificent.

The wealth of delightful melodies and the infectious dance-flavoured rhythms are all brought across with Trotter’s hallmark flair and panache, and, as ever, his ability to communicate real enthusiasm for the music makes this a hugely attractive recording…This should appeal to an audience who may not necessarily be aware that this period in English music history is every bit as musically valuable as Buxtehude, Bach et al.