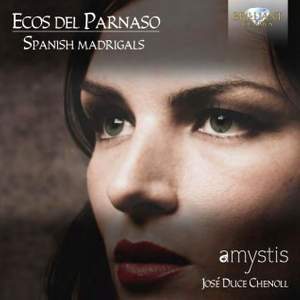 The ensemble’s first two issues, devoted to Cabanilles and Comes, showed Chenoll’s deep interest in the neglected music of his homeland. These performances display the same devotion and skill.... — Fanfare, January/February 2020 More…

The madrigal tradition in 16th-century Spain: a rich treasure-trove mined by a native consort group specialising in music of the period, full of little-known names and exciting discoveries.

Gibbons, Monteverdi and Willaert represent the high watermark of madrigal writing in England, Italy and the Netherlands respectively. Their subtle marriage of music and text has produced enduring miniature masterpieces of love lost and found and pastoral humour. And there are no shortage of distinguished contemporaries in those countries. But Spain, the home of golden-age polyphony, also had a lively tradition of madrigal composition, too little of which is known beyond native shores. This fine new recording should address that shortcoming.

In fact Spain already had a flourishing culture of secular songs in the form of villancicos when Italian composers arrived at royal courts and chapels during the 16th century and bringing with them their own traditions of popular music. Mateo Flecha ‘The Younger’ was a Catalan, Carmelite monk who showed himself adaptable to this Italian influence in his own book of madrigals, eventually published in Venice and excerpted here. Joan Brudieu (1520-1591) was a Frenchman also living in Catalonia who published madrigals in Spanish and Catalan (both languages represented in this collection).

Even less familiar is the name of Pedro Valenzuela – his dates are lost to us – but he uses a sophisticated harmonic vocabulary with acute sensitivity to text in a trio of Italian-texted madrigals. He had emigrated to Italy as a singer at St Mark’s in Venice, and he was followed by Sebastián Raval, while Stefano Limido travelled in the other direction. Thus as a whole the collection illustrates a stimulating cross-fertilisation of Spanish and Italian styles in consort music.

The performances are both polished and authoritative, attentive to original sources and grounded in a thorough understanding of madrigalian style. Founded by its director José Duce Chenoll in 2010, the Amystis ensemble already has an impressive catalogue of recordings to its name. ‘Fervently committed readings,’ remarked Sir Nicholas Kenyon in The Observer of their complete Cabanilles collection (BC94781). A more recent album of Juan Bautista Comes (BC95231) was praised by Early Music Review: ‘Amystis are worthy exponents of this glorious music, negotiating its considerable complexity with aplomb.’

Superb performances by the Spanish vocal ensemble Amystis, specialized in presenting hidden gems from the Spanish Renaissance and Baroque. Their previous recordings for Brilliant Classics with works by Cabanilles and Comes gained excellent critical acclaim in the international press.

The booklet contains liner notes and the original song texts and their English translation.

The ensemble’s first two issues, devoted to Cabanilles and Comes, showed Chenoll’s deep interest in the neglected music of his homeland. These performances display the same devotion and skill. For devotees of this period, Chenoll is a dependable guide and the rare repertoire is an essential addition to any serious collection. You will know if this lovely disc is for you.