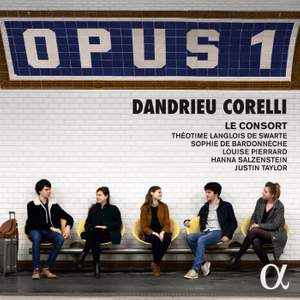 Although Dandrieu is best-known for his talents as an organist, his trio sonatas deserve a prominent position in the chamber music of the period. They show a stunning mastery of style and variety of characters. Dances overflowing with energy, mischievous and impetuous counterpoint between the three parts, movements with highly expressive Italianate suspensions, articulation, phrasing, rhythm, gentleness, passion – in a word, life. He published them under the title Premier Œuvre in 1705, when he was twenty-three years old, our own age when we first met and played these sonatas: Opus 1 was therefore a natural choice as the title for this album!’ say the members of Le Consort.

‘The trio sonata was created in the second half of the seventeenth century and Corelli, the master of the genre, helped to diffuse it throughout Europe. Dandrieu’s trio sonatas are marked by Corelli’s influence. And when he calls one of his harpsichord pieces La Corelli, he indicates himself as an heir to the great Italian maestro . . . We have arranged this piece as a sonata a tre.