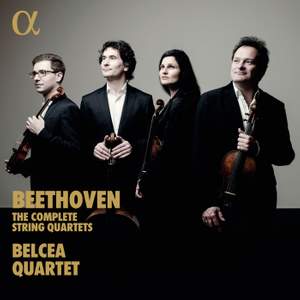 Alpha is reissuing the complete Beethoven quartets by the Belcea Quartet : 'Beethoven's music has been at the center of our life as a quartet from our very first rehearsal together back in 1994.

However, it is more recently that we immersed ourselves totally in Beethoven in preparation for, and during the course of the immense project of performing and recording all of his string quartets in the season 2011/12. It is during this past year that Beethoven's music became an allconsuming passion for each of us. These sixteen quartets written some two hundred years ago form one the most complete and powerful musical statements ever made. The completeness lies in their unprecedented intensity and in the astonishing development that can be traced between the early and the late works - a thirty-year long revolution which altered forever the way we experience music.'