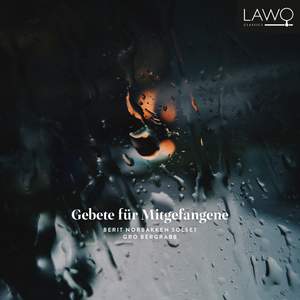 III. Gebet in besonderer Not

Berit Norbakken Solset is one of Norway’s leading sopranos.

After graduating from the Norwegian Academy of Music, she won the 2006 INTRO-classical competition, the prestigious launch programme sponsored by Concerts Norway.

Besides appearing often as soloist in oratorios, passions and masses, Solset performs solo concerts at Norway’s major festivals. She has also sung opera with great success. She collaborates closely with conductor Juanjo Mena, with whom she regularly appears in concert.

Solset performs as soloist in major concert halls, with leading orchestras and conductors like Robert King, Daniel Reuss, Erik Nielsen, Andreas Spering, Olof Boman and Ottavio Dantone. She is accompanied by organist Gro Bergrabb (b. 1979) who received a degree in church music from the Norwegian Academy of Music as a student of Professor Jon Laukvik and who is very active in her native Norway as a performer.