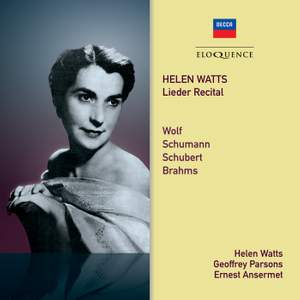 7. An meinem Herzen, an meiner Brust

Presented on CD for the first time and newly remastered, a pair of Romantic Lieder recitals by the Welsh contralto who inherited the mantle of Kathleen Ferrier.

The history of British contraltos on record stretches back to Constance Shacklock and before her Dame Clara Butt, but it was Ferrier who defined the sound of that voice type for millions of listeners around the world. Produced as if from a great distance, noble and yet communicating the most profound and immediate of emotions, the possessors of a true contralto voice inspired Handel, Elgar and others to compose some of their most heartfelt arias.

It was with the music of Handel that the Welsh contralto Helen Watts made her debut on record: in performances of Semele and Sosarme recorded by L’Oiseau-Lyre, released in 1955 and recently reissued by Eloquence. Along with Alfred Deller and William Herbert, Watts counts among for British singers discovered by the founder of L’Oiseau-Lyre, Louise Hanson Dyer, in her search the young and talented musicians who could breathe new life into old and mostly unfamiliar music. Her career burgeoned, on disc and especially on the concert platform, where she became the alto soloist of choice for countless performances of Messiah and The Dream of Gerontius.

However, Watts was also an accomplished recitalist, and her gifts in this area have often been overlooked. The present release compiles the first two song recitals she recorded, in 1963 and 1964. In the world of Schumann’s Frauenliebe und -Leben she enters intimately into each song’s shades of feeling, and she brings a special passion to the three Mignon songs of Hugo Wolf. The earlier recital couples more Schumann – notably the late and haunted Five Songs of Mary Stuart – with favourite Lieder of Brahms such as Ständchen and the Op. 91 pair with obbligato viola (Cecil Aronowitz). The anthology is completed with more Brahms, the Alto Rhapsody she recorded in Geneva with Ernest Ansermet in 1965: solemn yet warm and deeply human, a perfect testament to her art and to the praise of her modern counterpart, Nathalie Stutzmann: ‘an extraordinary contralto’.

‘Gestillte Sehnsucht shows off her velvety low notes to perfection … She sings Mary’s prayer on the birth of her son with deep devotion … [Geoffrey Parsons] is a perfect partner in this most successful recital … Helen Watts must give us some Wolf.’ Gramophone, May 1964

‘The Mignon songs, so complex in texture but needing to be performed with great clarity and simplicity, call for the notable gifts of interpretation Miss Watts possesses.’ Gramophone, October 1966 (Wolf)

In all the Brahms selections the singer comes alive, adding a welcome affectionate manner and more depth of involvement...everything deserves admiring attention.