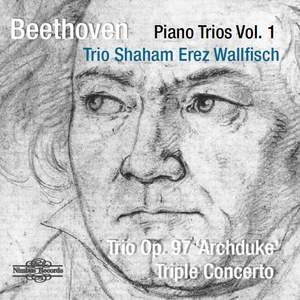 Orchestra of the Swan, Eckehard Stier

The Largo is a seamless reverie and the Finale is vigorous and open-hearted...In both works the recording is clear and well balanced. — The Strad, November 2019

The monumental ‘Archduke’ Trio, op.97, represents Beethoven at the peak of his creativity in the genre. Sketches for all four movements of this ‘symphony scored for a trio’ are included in a sketchbook of 1810 containing also drafts for the Egmont music and the String Quartet in F minor, op.95. The manuscript score was written out between 3 and 26 March 1811. Three years elapsed before the work’s public premiere, by Beethoven, Schuppanzigh and Linke, on 11 April 1814 as part of a charity concert in the hall of the Hotel ‘zum Römischen Kaiser’ in Vienna. This concert sounded the death knell of Beethoven’s public career as a pianist, owing to his profound deafness. The work’s critical reception was understandably mixed, but the celebrated pianist Ignaz Moscheles praised its originality while expressing reservations about the ‘clarity and precision’ of Beethoven’s pianism. Significantly, a repeat performance of the work a few weeks later was Beethoven’s final public appearance as a pianist.

Inspired by the sinfonie concertante for two or more soloists and orchestra, Beethoven transports the piano trio into an orchestral context with his Triple Concerto in C major, op.56. His choice of this particular solo combination was unprecedented in the literature and, in his words, ‘really something new’; it was later to inspire composer Emánuel Moór.

Trio Shaham Erez Wallfisch was founded in 2009 and comprises three of the finest international instrumentalists performing today. Playing chamber music together at the Pablo Casals Prades Festival Hagai Shaham and Raphael Wallfisch recognised an immediate musical synergy. Arnon Erez joined them for trio concerts in Lucerne and the Netherlands later that year and the Trio Shaham Erez Wallfisch was established. Since its formation, the Trio has been invited numerous times to prestigious chamber music series at venues such as London’s Wigmore Hall, Amsterdam Concertgebouw, Rotterdam De Doellen, Hamburg Elbphilharmonie. The trio often appears in Spain, the UK, Ireland, the Netherlands, Belgium, Israel and Canada. The Trio has been invited by the Wigmore Hall to present the complete Beethoven piano trios in 2020.

The Largo is a seamless reverie and the Finale is vigorous and open-hearted...In both works the recording is clear and well balanced.