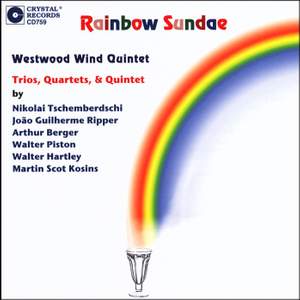 This CD features some of the most interesting and appealing music for woodwinds from the 20th century. Incorporating different styles, the six works are marvels of woodwind writing. The Tschemberdschi piece is little known but is a wonderful example of Russian composition from the mid-20th century. There is nothing else quite like it for woodwinds. South American beauty and rhythms permeate Ripper’s delightful Trio, and Berger’s Quartet was called “one of the most satisfacotry pieces for winds in the whole modern repertory” by Virgil Thomson. Walter Piston’s Three Pieces is a wonderful trio that deserves more hearings. Walter Hartley is well-known for his marvelous writing for winds. Martin Scot Kosins’ Rainbow Sundae is a very listenable work in the style of his other pieces, some of which have become favorites on Crystal.

The Westwood Wind Quintet, now in its 58th year, is possibly the most-esteemed wind quintet in the world. Having just released the well-received 12-CD set of the complete 24 Quintets by Anton Reicha, the group has garnered rave reviews from critics and the public for its more than 27 albums, starting with the ground-breaking recording of the Schönberg Wind Quintet on Columbia Records (now Sony), through the Nielsen, Hindemith, Barber, Dahl, etc., Quintets, and now this Rainbow Sundae.