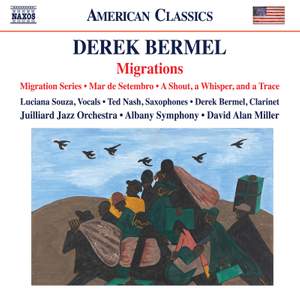 Migration Series, Mar de Setembro, A Shout, a Whisper, and a Trace

I liked the first work on this disc quite a bit, but each one more than its predecessor such that by the final work, I was convinced I was hearing the music of a true master of composition. — Fanfare, March/April 2020 More…

I. Landscape - Interlude No. 1

II. After a Lynching

Bermel: A Shout, A Whisper, and A Trace

Migrations provides a generous view of Derek Bermel’s superb craftsmanship and eclectic style, in which classical forms, world music, jazz, blues and American folk music create a mix that reaches directly into the body and the heart. Commissioned by Wynton Marsalis, Migration Series has its roots in African American music, its impeccable counterpoint and biting rhythms expressed through orchestration that sounds like a city coming to life. Mar de Setembro was inspired by Luciana Souza’s bell-toned voice and the intense feelings of Portuguese saudade, while A Shout, a Whisper, and a Trace honours Bartók’s last years in New York, referring to the Concerto for Orchestra as well as to jazz and Balkan music.

Eclecticism has been an important and popular stylistic movement in 21st-century classical music, and few do eclecticism as well as composer and performer Derek Bermel. He has premiered and performed on four continents, has collaborated with an eclectic array of artists, and received commissions globally. His work Voices for clarinet and orchestra was nominated for a Grammy Award.

Grammy Award-winning conductor David Alan Miller has established a reputation as one of the leading American conductors of his generation. Music director of the Albany Symphony since 1992, Miller has proven himself a creative and compelling orchestra builder. Through exploration of unusual repertoire, educational programming, community outreach and recording initiatives, he has reaffirmed the Albany Symphony’s reputation as one of the nation’s leading champions of American symphonic music and most innovative orchestras. A native of Los Angeles, Miller holds a Bachelor’s degree from the University of California, Berkeley and a Master’s degree in orchestral conducting from The Juilliard School.

Gtammy Award winner Luciana Souza is a leading jazz singer and interpreter. Her work as a performer transcends the traditional boundaries of musical styles, with roots in jazz, a sophisticated lineage in world music, and an enlightened approach to new music.

The Juilliard Jazz Orchestra (JJO), the premier large ensemble for Juilliard Jazz, was founded when the programme began in 2001. Led by resident conductor Jerome Jennings, the ensemble performs a wide spectrum of American jazz music, to contemporary composers including Jimmy Heath, Wynton Marsalis and Ted Nash, among many others.

The Albany Symphony Orchestra conducted by David Alan Miller has produced some of our most acclaimed American Classics releases in recent years, including Daugherty’s Dreamachine (8559807): ‘Kudos…to David Alan Miller, who shapes each work most thoughtfully, and never allows the forward motion to flag. The Albany Symphony plays brilliantly throughout the well-recorded disc’ (Fanfare), and Corigliano’s Grammy Award-winning Conjurer (8559757): ‘David Alan Miller’s Albany players gleam under the solo spotlight that Corigliano often shines on them and also respond with plenty of whump – faithfully captured – on the few occasions that he lets them rip as an ensemble’ (International Record Review).

I liked the first work on this disc quite a bit, but each one more than its predecessor such that by the final work, I was convinced I was hearing the music of a true master of composition.

Stylistically, Bermel’s music is not just eclectic but bracingly so. The three works here are nothing if not exciting, compelling attention from the very first bars…The Albany Symphony Orchestra, with their various partners, play superbly – and idiomatically – throughout. Fine sound, too. Recommended.