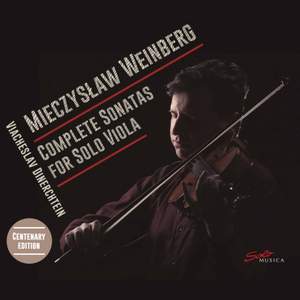 Impressive immersion in astringent and unconventional unaccompanied sonatas…heartily recommended to the ever growing group of Weinberg enthusiasts. — The Strad, March 2020

This special edition commemorates Mieczysaw Weinberg's centennial by highlighting a remarkable, rare four-sonata set for solo viola. Composed during Weinberg's later period, when his music suffered a sharp decline in popularity into eventual oblivion, these monumental sonatas have seen little daylight since conception, despite representing what conductor Thomas Sanderling rightfully regards as Weinberg at his finest. In addition to over 90 minutes of unique musicintensely vivid, warm, thought-provokingthis 2-CD edition includes a special in-depth essay by Weinberg authority David Fanning, rare historical photographs (some never published), inputs from several notable personalities and an essay by the performer. ""Each bar of this interpretation by Viacheslav Dinerchtein is filled with deep insight and dedication to a genius whose music we should all get to know. The masterful interpretation of these virtually never performed works should arouse the interest of other musicians and music lovers, and I hope the public will be as excited as I am by this recording of the Sonatas for Viola Solo composed by Weinberg, truly a milestone of contemporary viola repertoire"" Gidon Kremer.

Impressive immersion in astringent and unconventional unaccompanied sonatas…heartily recommended to the ever growing group of Weinberg enthusiasts.