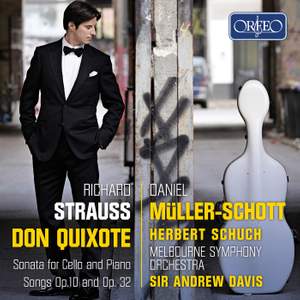 There’s little to fault in Müller-Schott’s playing…He sings out the two songs gorgeously, and the performance of the sonata is technically superb – full of focus and conviction and, in the moments... — Gramophone Magazine, Awards Issue 2019 More…

During his long and exceptionally fruitful creative life, Richard Strauss (18641949) composed only a few works for the cello. Only three have survived and small as that number may seem, those cello works are critical to the composers development. Daniel Müller-Schott sees the early Sonata for cello and piano op. 6 and the late tone poem Don Quixote op. 35 as marking the path that was to lead Strauss within the space of a few years from Romanticism to the Modern era in music. The cellist highlights this watershed in Strausss artistic development with his own transcriptions, expressly made for this CD, of the Lieder Zueignung op. 10/1 and Ich trage meine Minne op. 32/1.

There’s little to fault in Müller-Schott’s playing…He sings out the two songs gorgeously, and the performance of the sonata is technically superb – full of focus and conviction and, in the moments that require it, lyricism…The tone poem is the main event, though…Davis proves himself again to be an instinctive Straussian - his pacing is impeccable and he draws vivid playing from his orchestra.

The freshness of youthful Romanticism in Strauss’s Cello Sonata is immediately intoxicating.