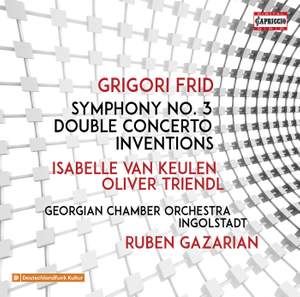 The playing of Isabelle van Keulen is what one has come to expect of her. It is musicianship of the highest order, filled with great sensitivity and a firm control of her technique. While the... — Fanfare, January/February 2020 More…

Frid, Grigory: Symphony No. 3 for string orchestra and timpanis, Op. 50

With his opera The Diary of Anne Frank (1968/69), by virtue of the subject alone Grigory Frid could be sure of attracting attention beyond the borders of Russia. The remaining enormous oeuvre by the composer, covering mainly instrumental works, songs, radio and film music, still remains to be discovered and treated in depth. Both prior to and after the collapse of the Communist USSR, Frid was awarded the highest honours, e.g. the title of Artist of Merit (1986) and the Moscow Prize (1996). If it is probably not erroneous to view Frids aesthetic position in a propinquity to Dmitri Shostakovich, on the one hand, and in the environment of his contemporaries a generation younger such as Edison Denisov, Sofia Gubaidulina and Alfred Schnittke. As in the cases of these composers, Frids music is also positioned in a field of tension between following the great Russian tradition and the quest for possibilities of expression in keeping with new, modern and international trends.

The playing of Isabelle van Keulen is what one has come to expect of her. It is musicianship of the highest order, filled with great sensitivity and a firm control of her technique. While the Concerto does not call for virtuosity, Triendl performs with a superb understanding of the music and makes the most of its expressive qualities. He is a remarkably fine musician. The Georgian Chamber Orchestra Ingolstadt, under conductor Ruben Gazarian, play with great precision and clarity.

With outstanding performances of all three works and sound of a demonstration quality, this recording is a must-hear for anyone interested in Russian music of the Soviet era.

Frankly [the concerto] riveting. The soloists are beyond excellent, the orchestra give their all and Capriccio’s sound is subtly detailed…