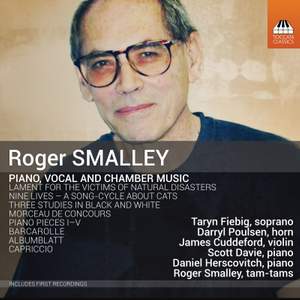 Smalley’s music—if this album of recording premieres is any indication—ran the gamut from the thorniest 1960s New Music (with New Zealand’s Douglas Lilburn, he was one of the Southern Hemisphere’s... — Fanfare, March/April 2020 More…

No. 1, With Slow & Confidential Pace

No. 3, A Cat Tinkles Discord on a Piano

No. 6, One of the Clock, and Silence Deep

No. 9, Observe the Cat upon This Page

Smalley, R: Lament for the Victims of Natural Disasters

Roger Smalley (1943-2015) made his mark, first in his native Britain and then in Australia, as composer, pianist, conductor, writer, academic and teacher. Although as performer and commentator he was at the forefront of musical modernism, he was also very fond of nineteenth-century Romanticism, and much of his music bridges the gap between old and new, retaining its roots in the past while reflecting the concerns of his own time, as the works on this album demonstrate.

Smalley’s music—if this album of recording premieres is any indication—ran the gamut from the thorniest 1960s New Music (with New Zealand’s Douglas Lilburn, he was one of the Southern Hemisphere’s leading pioneers in electronic music) to works of disarming simplicity that reflected his lifelong passion for the music Brahms and Schumann.

This magnificent disc alerts us not only to the importance of a composer both British and Australian but to a significant voice in contemporary music in a wider sense. I sincerely hope that this recording, of performances of the highest order, will be the beginning of a revival of the work of a composer of staggering talent and sublime inspiration.

His avant-garde explorations remain what’s special about him, but his midlife revisiting of tonality was deftly handled.