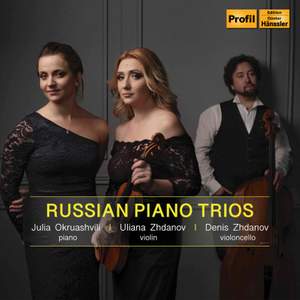 The sound quality of this release is vivid, detailed, well balanced, and free from harshness, although the acoustic is less spacious than in many recent recordings. Instrumental timbres are very... — Fanfare, May/June 2020 More…

Alyabyev: Piano Trio in A minor

Piano Trio in A Minor: I. Allegro ma non troppo

A mournful, melancholic influence became characteristic of the Russian piano trio Alexander Alyabyev had displayed considerable musical talent as a young man. While still a serving officer in the Hussars, he began composing chamber music, writing string quartets, piano trios and many other chamber works, and soon turned his hand to music for orchestra (symphonies, overtures) and vocal works (operas, sacred and secular choral works and some 150 songs). He occupied much of his time in exile by collecting folk melo­dies. Sergei Rachmaninov a truly phenomenal Russian piano virtuoso, composer and conductor (notably at the Bolshoi Theatre), was pre-eminently a composer for piano, whether in solo­piano compositions, piano works for four hands or six hands, or pieces for two pianos. His chamber music too is dominated by works featuring the piano (piano trios and duo com­positions). He also wrote major works for piano and orchestra: his Piano Concertos nos. 1-4 and the Rhapsody on a Theme of Paganini. Arno Babadjanyan's compositional output, showing the clear influence of Khachaturian, extended to an impressive variety of genres.

The sound quality of this release is vivid, detailed, well balanced, and free from harshness, although the acoustic is less spacious than in many recent recordings. Instrumental timbres are very well defined...this release showcases a promising new ensemble, and I can recommend it for the quality of the music and performances it contains.