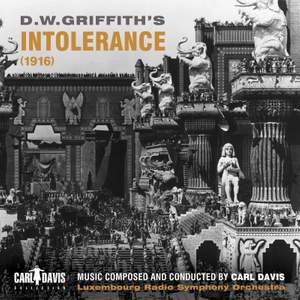 It’s a treat to finally have an album of this robust orchestral score, which was recorded in Luxembourg in 1990 for the commercial release of the film. It’s not subtle in its use of thematic... — BBC Music Magazine, April 2020, More…

Out of the Cradle

The Siege of Babylon

Fire Machine and Defeat of Cyrus

The Boy's Return and Victory Celebration

Prosper's Rescue Attempt and Via Dolorosa

The Death of Brown Eyes

Cyrus at the Gates

The Fall of Babylon

The Walk to the Scaffold

How exciting to revisit this recording made in Luxembourg in 1986 as a soundtrack for what was then the Thames Silents. The team of directors and producers, Kevin Brownlow and David Gill, and myself were delivering up to three restorations of full length feature films a year. And I was about to embark on the 1925 Ben Hur score as soon as I had finished Intolerance. The recording of the score followed 2 live performances of the film with the RTL Orchestra so they were more than ready. The main Intolerance theme which spanned the entire 2 hours 40 minutes score had already passed into the orchestras history it was hummable and quoted at times of stress. There has been a recent re-issuing on DVD with remastered sound and new material from the Library of Congress. Performing the score to this extraordinary film is always challenging but deeply rewarding. The films theme has never dated and the international crises of 1917 (the films first release) are as relevant today in 2018. When will we learn? - Carl Davis - 26th January 2018

It’s a treat to finally have an album of this robust orchestral score, which was recorded in Luxembourg in 1990 for the commercial release of the film. It’s not subtle in its use of thematic colouring or place-setting instrumentation, but that’s why it works so well. Davis is the anchor in an otherwise unwieldy set of plotlines, his score – with its repeated central theme – bringing everything together with lyricism and perfect storytelling.