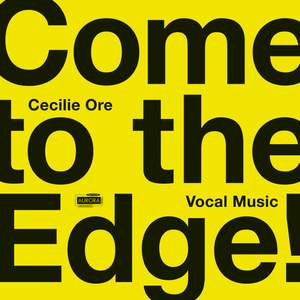 Come to the Edge!

Ore: Come to the Edge!

Ore: Who do you think you are?

<p>With the works on this album, Cecilie Ore manifests her connection with a great European art-music tradition by allowing language to influence her composition. Ore wrote 'Come to the Edge!' in 2013 as a response to one of the most disputed trials of our time: that of Russian resistance group Pussy Riot. <p>Ore wrote 'Come to the Edge!' for the BBC Singers. The piece is dedicated to the Russian resistance group Pussy Riot, whose members were sentenced to prison for two years accused of "hooliganism inspired by hate of religion". In Ore's work, excerpts from the trial are juxtaposed with historical and anecdotal quotes on the significance of freedom of speech. Being both a commenting piece, but also addressing the audience it demonstrates a Verfremdungsteknikk in Ore's new style of writing. Ensemble 96 contributes with the highest level of perfection and strength right in your face! <p>'Who do you think you are?' was written for the 200th year anniversary of the Norwegian constitution, and the piece might be the only solo vocal piece performed from the most impressive rostrum in parliament. But - 'what are we celebrating?' The text echoes women expressing themselves and taking a stand in the public sphere, a choice that in many instances has led to threats of violence, rape and death. The soprano Eir Inderhaug gives voice to a woman representing all women and thereby elucidates the inner workings of a murky reality. <p>With 'The Vatican Trilogy' from 2016-17, Cecilie Ore has created a contemporary Madrigal Comedy, where the innate absurdity of the text is used to create an immediate connection with the audience. Even though parts of the trilogy are taken from historical documents of the Vatican, the piece comes off as surprisingly mundane and with an underlying humorous critique of faith and superstition. Nordic Voices is an outstanding cast in this surreal, yet historically correct account of what is happening behind the solid walls of the Vatican.