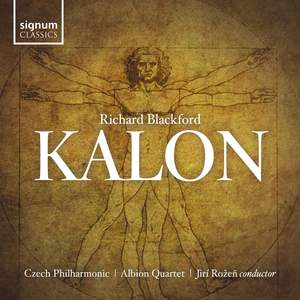 Blackford’s meditation on beauty is both sophisticated and appealing and is thrillingly performed. But beware: the CD is only 24 minutes long. — BBC Music Magazine, October 2019, More…

The Ancient Greek word kalon was used by philosophers to describe perfect physical and moral beauty. In this recording, the Albion Quartet and the Czech Philharmonic explore the different aspects of kalon through the context in which beauty can exist in ugliness and darkness.

This EP is the result of Richard Blackford’s doctorate at the University of Bristol, which investigates the use of polytempo. The recording is a way of applying the findings of his doctorate in a range of musical contexts. Kalon is unique as it explores the use of polytempo in the context of extended tonality and modality, which could be said surpasses the complexity posed by serialist works of a similar nature, such as Stockhausen’s Gruppen or Carré.

‘Their attention to the smallest detail reaps dividends’ – Gramophone

Violoinist of the Albion Quartet, Tamsin Waley-Cohen, has featured as

a soloist on the disc Niobe, featuring the premier recording of a violin

Blackford’s meditation on beauty is both sophisticated and appealing and is thrillingly performed. But beware: the CD is only 24 minutes long.

Only offering 24 minutes of music, and one work, this disc is nevertheless rewarding...Greek folk music figures, Beethoven is quoted and the work enfolds a consideration of the Holocaust.