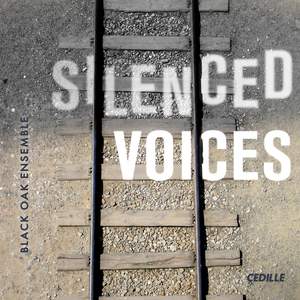 All but one of these composers died at the hands of the Nazis. As such, there’s more than a shadow of pathos over this otherwise delightful clutch of chamber works. — BBC Music Magazine, December 2019, 4 out of 5 stars More…

An album of intriguing works by six promising, early 20th century Jewish composers. Silenced Voices includes the world premiere recording of wartime survivor Géza Frids early Trio à cordes, Op. 1, an inventive work infused with Hungarian folk music influences. Composer-cellist Paul Hermanns Strijktrio, a forward-looking, cosmopolitan work from the early 1920s, shares its melodies among all three instruments. Dick Kattenburgs youthful Trio à cordes was praised in a 1938 concert review for its remarkable mastery and a very personal style. Gideon Kleins Trio for violin, viola and cello is notable for its treatment of a Moravian folk song that serves as the theme of its middle movement. Hans Krásas Tánec (Dance) is a five-minute whirl of dancelike episodes framed by the sonic evocation of trains. His Passagalia is more somber, with its own train motifs, while its companion Fuga bears shades of Germanic and Czech influences and occasional grotesque touches. Sándor Kutis Serenade for String Trio brims with Hungarian folk music and piquant chord clusters.

All but one of these composers died at the hands of the Nazis. As such, there’s more than a shadow of pathos over this otherwise delightful clutch of chamber works.

there is no faulting this debut album by the Chicago-based Black Oak Ensemble: rhythmically tight and, like the best trio recording, conveying a sense of a fuller ensemble.

A compelling collection of characterful music for string trio largely by eastern European victims of the Holocaust, played with fierce eloquence by Chicago’s Black Oak Ensemble and recorded so crisply that I could swear the musicians were sitting just by my right shoulder. Some composers’ names have become familiar. Others offer new and aching evidence of youthful promise stamped out. All their voices deserve to be heard and remembered.