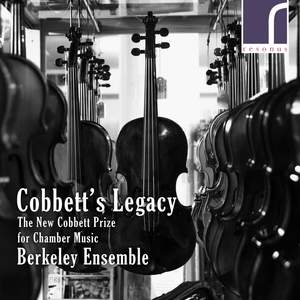 Hurlstone: Phantasie in A Minor

Knussen: A Purcell Garland: …Upon One Note

The name of Walter Willson Cobbett (1847-1937) is synonymous with chamber music from the first half of the twentieth century his contribution to the genre was immense, particularly through his many commissions and the prize for chamber music that bore his name. The Berkeley Ensemble have sought to build on this unique legacy, introducing The New Cobbett Prize for Chamber Music. This new recording from the ensemble, brings together the three winning works from the inaugural competition with the work that won the first original competition William Hurlstones Phantasie for string quartet. Also included is A Purcell Garland, three arrangements of a composer who inspired Cobbett by Oliver Knussen, George Benjamin and Colin Matthews.

The enterprising Berkeley Ensemble has set up ‘The New Cobbett Prize or Chamber Music’, inspired by Walter Wilson Cobbett’s early 20th-century original. Here are the first fruits, in meticulous performances.

Cobbett was an open-minded soul, and he would surely have been delighted at the range of styles and the depth of imagination in the three winning pieces included here. The spirit of Messiaen hovers over Barnaby Martin’s Lazarus...Samuel Wesley Lewis’s Sequenza probably comes closest to the Phantasy form as Cobbett would have recognised it...it’s performed with energy, sensitivity and superb refinement; bass player Lachlan Radford plays with particular subtlety and expression.

A fascinating disc, well programmed and played with splendid commitment.

Lewis’s Sequenza, for string quartet and double bass, is an expert piece of string writing, though in many ways it’s a much less striking composition than either Laurence Osborn’s visceral exploration of string textures in Living Floors for cello and double bass, or Barnaby Martin’s haunting septet Lazarus