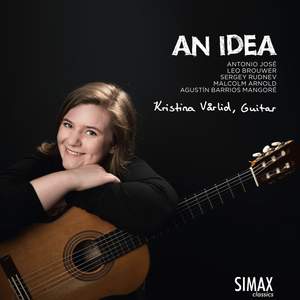 Kristina Varlid’s album ‘An Idea’ showcases an abundance of music for guitar from the past 100 years. Supported by outstanding technique and strong musical instincts, Kristina’s debut recording is a treat. The album is recorded in the lovely acoustics of Utstein monastery, just outside Kristina’s hometown of Stavanger.

Agustin Barrios Mangore (1885-1944) from Paraguay had an adventurous life as a traveling guitar virtuoso. He wrote ‘La Catedral’ after a visit to the San Jose cathedral in Montevideo, and the parts of the piece were first performed in 1921. Antonio Jose (1902-1936) from Spain had a scintillating talent for composing - praised by Ravel at the time - but was executed during the Spanish Civil War. Malcolm Arnold (1921-2006) wrote his Fantasy for the incomparable Julian Bream.

The title piece for Kristina’s debut is written by Leo Brouwer (1939), born in Cuba and with a career as composer, guitarist and conductor. The Russian composer Sergey Rudnev (1955) has written a large number of pieces which try to rescue his native country’s folk and popular song tradition in a classical guitar format. ‘The Old Lime Tree’ comes from an urban tradition of romance singing.

Kristina Varlid (b. 1994) from Stavanger, Norway, is already an internationally acclaimed classical guitarist after winning several competitions and awards - among them 1st prize in Antwerpen International Guitar Competition 2017 and the Koblenz International Guitar Academy Award in 2018. Winning the Grachtenfestival Conservatorium concours in 2017, Kristina was also named best music student in The Netherlands that year and became a part of the prestigious Walk of Fame at the Hanze University in Groningen in 2018.

Kristina has performed in several major halls including The Royal Concertgebouw in Amsterdam. Kristina Varlid has also performed as a soloist with Bergen Philharmonic Orchestra and Lithuanian National Symphony