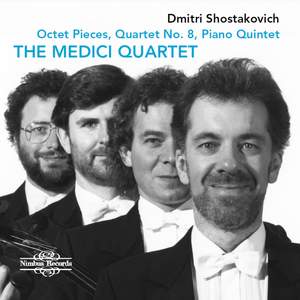 The astute sensitivity of John Bingham’s playing underpins a fine account of Shostakovich’s Piano Quintet, and the Quartet No. 8 has intensity without excessive aggression. Interesting fillers. — BBC Music Magazine, October 2019, 4 out of 5 stars More…

Shostakovich was no child prodigy — he began piano lessons at nine — but success as a composer came early when his First Symphony, written as a graduation piece, was acclaimed in Leningrad at the premiere in May 1926. That said, there is some fine chamber music in Shostakovich's student output. Much of the Two Pieces for String Octet Op. 11 actually predates the First Symphony Op. 10, remarkably assured for an eighteen year-old. The Two Pieces for String Quartet on the other hand did not surface at all until 1984! Dedicated to the J. Vuillaume Quartet they give us the suggestion of a Shostakovich quartet sound circa 1931 — seven years before the real thing. The original stimulus to compose a piano quintet came from musicians of the Beethoven Quartet who had asked him for something they could all play together. But Shostakovich must have relished the technical challenge of a medium which few twentieth century composers had been prepared to tackle because of its peculiar problems of balance and texture. The composer himself gave the first performance with the Beethoven Quartet in Moscow on 23 November 1940. And, utterly non-ideological as it was and is, the music won him a Stalin Prize. Shostakovich was one of the most important and prolific writer of string quartets in the 20th century. His String Quartet No. 8 comes from an important period in his personal as well as his artistic life. Musically it comes from the same period as his widely acknowledged masterpiece, the Tenth Symphony. Dissident writers have claimed it represents the composer himself – a lost voice in a cruel world.

The astute sensitivity of John Bingham’s playing underpins a fine account of Shostakovich’s Piano Quintet, and the Quartet No. 8 has intensity without excessive aggression. Interesting fillers.