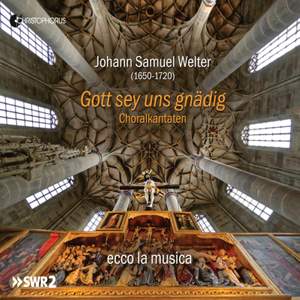 With only one voice to a part, textures are transparent but never lightweight. If there’s a slight same-iness to the musical diet, that’s not the fault of Ecco la musica, who acquit themselves... — Choir & Organ, September 2019, More…

True treasures of unknown music can still be discovered: One of these is the composer Johann Samuel Welter, who was born in 1650 near Schwäbisch Hall (Württemberg) and, apart from a few years as an apprentice in Nuremberg, always remained faithful to his homeland. In the free imperial city of Schwäbisch Hall a free reformatoryspirit prevailed and Welter worked there for 45 years as organist at the main church of St. Michael

until his death in 1720. He was certainly offered positions in Berlin, Frankfurt or Augsburg and is said to have composed over 400 works but unfortunately only just under a dozen vocal works have survived.

Welter was well known for his sacred cantatas and highly respected far beyond the borders of his country. Today he must be regarded as the most important composer of choral cantatas between Praetorius and JS Bach.

The Ensemble ecco la musica presents with five first recordings the great quality of the composer and complements it with instrumental music by Schmelzer, Bertali, Nicolai and others from the Langenburg Archive in the direct vicinity of Welter.

With only one voice to a part, textures are transparent but never lightweight. If there’s a slight same-iness to the musical diet, that’s not the fault of Ecco la musica, who acquit themselves admirably. Excellent supporting documentation only enhances one’s pleasure.