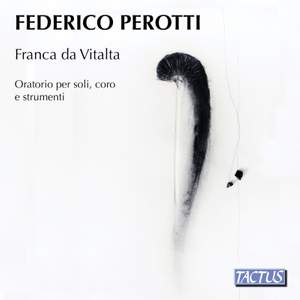 Rarely has music of such spiritual intensity sounded so earthy and quotidian in its urgencies. Choir and soloists, particularly Carlotta Colombo, handle difficult parts with the naturalness of... — Choir & Organ, October 2019, 4 out of 5 stars More…

This oratorio by the very young composer Federico Perotti tells the story of Franca da Vitalta, a woman from a noble family that, at the age of seven - in 1182 - entered by her own wish into the Benedictine monastery of S. Siro in Piacenza. At age twenty-three, upon the death of the abbess, she was unanimously elected as new superior mother, and, because of her strict observance of the Benedictine Rule, she was then faced with various conflicts amongst sisters also coming from noble families. According to the tradition, in 1273 she was canonised by Pope Gregorio X. Her cult is now still strong and alive in the city and province of Piacenza. Remembered by the Catholic Church on the 26th of April and her remains are now preserved in Piacenza, in the church dedicated to St. Raimondo. Federico Perotti creates a libretto on three temporal levels: the first is set in the years of the saint’s life, the second consisting of the biography that the historian Pier Maria Campi wrote in the early seventeenth century, and the third, external to the actions, is limited to observing and describing the passage of time.

Rarely has music of such spiritual intensity sounded so earthy and quotidian in its urgencies. Choir and soloists, particularly Carlotta Colombo, handle difficult parts with the naturalness of speech. An intensive, immersive experience rather than a concert piece and as such, ideally suited to CD and home listening.