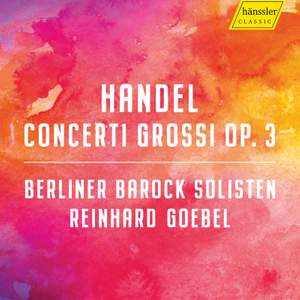 In the "Concerti Opus 3" Handel prescribes the standard orchestra for the late Baroque era: two oboes, strings and a continuo group. However, we learn from the solo-tutti supplements and the court account books that the ensemble was in fact larger and more polyphonic than the original, simple manuscript and the subsequent modern score suggest: occasionally the number of bassoons was equal to that of the cellos, though they were only given solo parts when they were disengaged from the bass group of instruments. It was common practice too – not in Cöthen or Hamburg, it is true, but certainly in Dresden, Paris and London – for at least two if not three oboists to be assigned to each part, these being augmented by special instruments such as the old-style recorder and the new transverse flute, and after 1750 the Clarinet. The Concerto Opus 3, no. 1 requires a total of six obbligato wind instruments (two oboes, two recorders and two bassoons) and is therefore no "odd man out" composition, but rather reproduces fairly accurately the minimum range that an orchestra at Handel's disposal would have comprised: in the middle movement of the concerto, two ripieno oboists take up recorders, and then return to the fold as oboists afterwards.