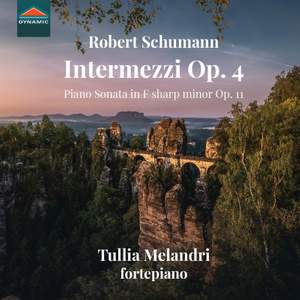 The Intermezzi…might equally well have been called ‘Improvisations’, they convey so strongly the impression that the composer is as surprised and gratified at what is emerging as his audience... — BBC Music Magazine, October 2019, 4 out of 5 stars More…

No. 2, Presto a capriccio

Schumann composed the Intermezzi Op. 4 in Spring 1832 and declared that they were special works, conceived as “longer Papillons” where “every note ought to be weighed and balanced”. The Intermezzi employ the same techniques used in Op. 2: quotations, fragments, and metamorphoses of poetry into music. The Piano Sonata in F sharp minor Op. 11 was written between 1833-35 and dedicated to his beloved Clara Wieck, to whom Schumann addresses with the two alter-egos of his split personality, Florestan and Eusebius, the former enthusiastic and passionate, the latter introvert and reflective. This recording was made on a Simon fortepiano dating from the 1830s, which possesses the same characteristics of the instrument used by Robert Schumann himself. Italian-born Tullia Melandri is specialized in Music philology and has got a diploma in piano and fortepiano. An award winner at numerous piano and chamber music competitions, Melandri has performed at festivals and in concert seasons all over Europe.

The Intermezzi…might equally well have been called ‘Improvisations’, they convey so strongly the impression that the composer is as surprised and gratified at what is emerging as his audience is. They are enhanced, too, by being played on an 1830 instrument, a fortepiano which nonetheless has more warmth of tone than we associate with them…[Melandri] gives a satisfactorily comprehensive and sensitive account of these works.

For those interested in hearing Schumann as he sounded in his own day, though, this entry makes for fascinating and musically engaging listening, even if it does not always captivate with its energy and its madness.